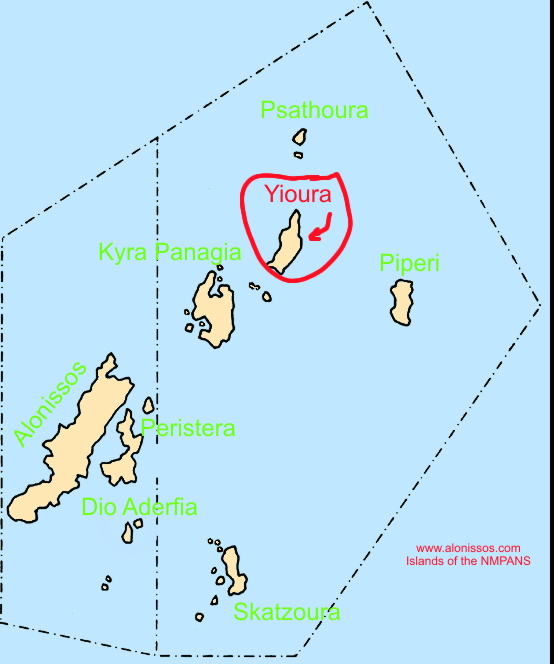 Highest Point: 570m
Yioura, the ancient Yerontia, is a large grey rock sticking out of the deep blue waters. It has an area of just 11 square kilometres and its coasts are steep and rocky. It's highest point is 570 metres and most of the surface is covered with scrub oak and low, dry vegetation. The scrub-oak once constituted a large forest, but starting in 1945 local people cut the tallest trees to make charcoal.

To many travellers it seemed a ‘devilish' island, because it is so intractable, rocky and steep that it inspires fear in the visitor who chooses to set foot on it. Totally suitable for this environment are the rare wild goats: there survives a supposedly wild variety of goat here with the scientific name Capra aegagrus f. hircus, but their origin is disputed among specialists. There are many varieties of flora, for example Fritillaria sporadum, a flower of the Rhinopetal family.

Another well-known feature of Yioura is the Cyclops' cave, where lived, according to the myth, the cyclops Polyphemus who was blinded by Oddyseas. The entrance to the cave was closed to visitors following an accident to a tourist some years ago, but it may be reopened under the auspices of the National Park, though no decision has yet been reached.

The island is now the property of the Greek state. Formerly it was inhabited by monks from Mount Athos: history relates that in the early nineteenth century the monks were attacked by pirates seeking refuge on the island. Only one monk managed to escape, living in the island's caves until 1840. During the Roman Empire Yioura was a place of exile for undesirables.

It is possible to land on the island only at one small bay in the South-west. From there there is a steep path to the Cyclops' cave and the Evangelistria church. On the western coast, where there is only an anchorage, near the spring known as Platania, the ruins of a temple, possibly dedicated to the God Poseidon, have been found.

Worth to mention are the beaches you can find at Yioura which are just two. Onw is called Pnigmenos N39°24.132' E24°10.924' with white sand and marble stones laying around. Because of the wild goats there are falling rocks frequently from the cliffs around. At the left side of the beach there is a small cave offering natural shadow almost all day in the beach, There is also normal water coming out from several holes in the cave. The view with the Psathoura island opposite is magnificent!

If you are going to sail to this island be careful as there isn't safe port in the island and the only place to get mobile phone signal is at the north part of the island at cape Erimitis (N39°25.534' E24°10.348') before you pass opposite to Psathoura island, you can receive Cosmote weak signal. At the beach of Pnigmenos is weak coverage from Vodafone and there nowhere in the area coverage from Wind mobile company.

Some photos from the island of Yioura 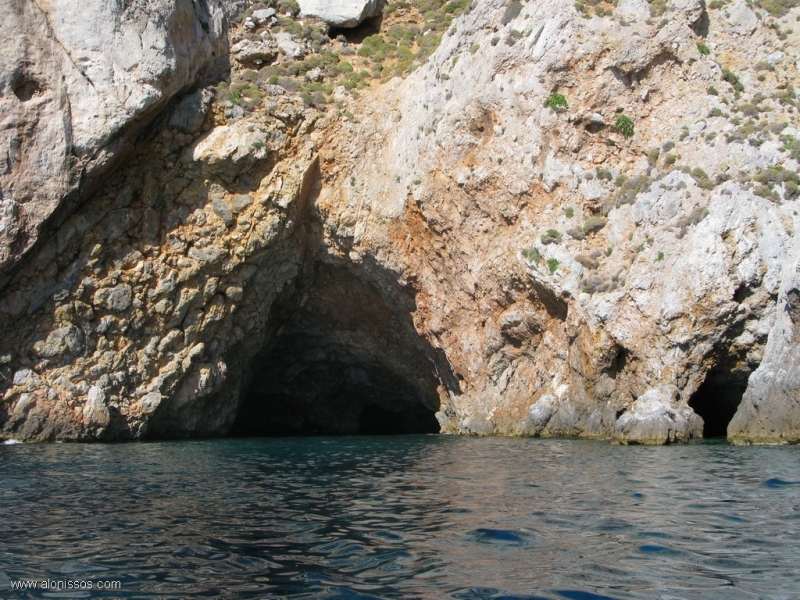