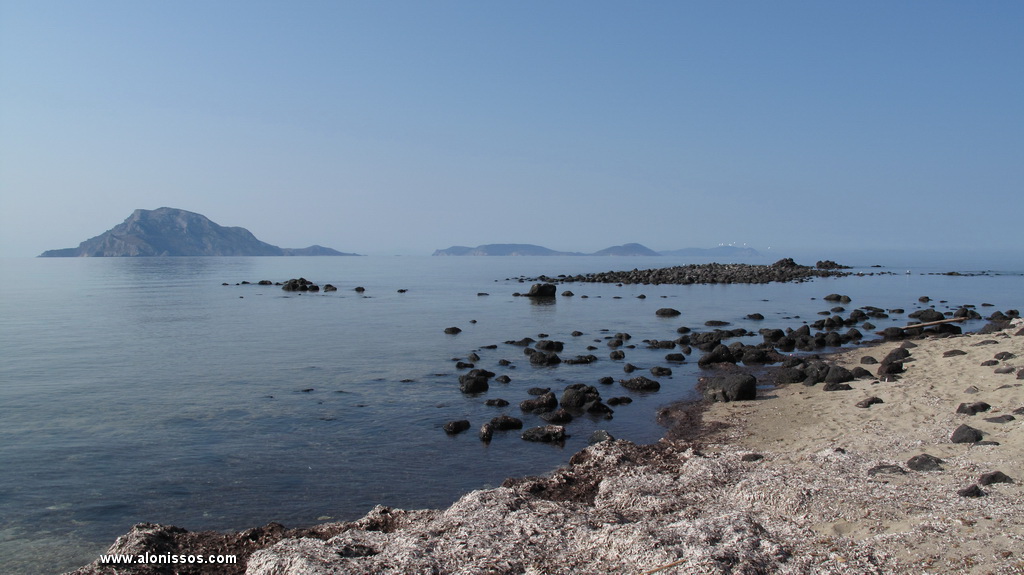 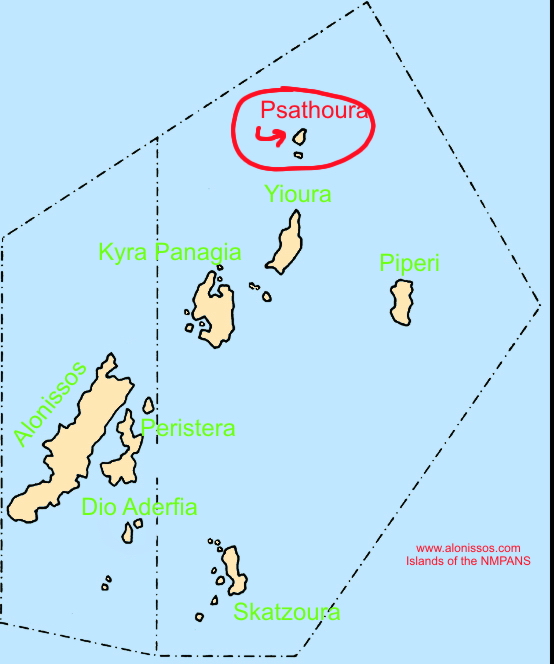 Psathoura is the northernmost island of this group. Its name probably derives from its shape, as it resembles a rush mat or straw hat (Psatha) floating on the sea.

It has a diameter of two kilometres and an area of two square kilometres, and is eight miles from Yioura. Its highest point of 14 metres is on the northern side. Its position is Latitude N39°29.897' and Longitude E24°10.815'. Between 1893 and 1895 a lighthouse 25 metres tall was built, giving a steady light visible at 18 miles. Before this the island was uninhabited. Some ruins on the northern side seem to have been an ancient fortress, and on the southern and western sides are remains of habitations dating from Neolithic times.

Psathoura is formed from a volcano that was active in the Pleistocene era. The lava consists of augitic andesite and olivine. The surface is earthy and fertile, and there is some underground water. In the last century divers from Kalymnos reported seeing, off the southern coast at a depth of 10 to 17 metres, a ruined city.

According to K. Mavrikis in his book ANO MAGNITON NHSOI, Psathoura may have been the ancient Chrysi (‘Gold'). We give (in translation) some extracts from his book:

The name Chrysi was given to cities where there was gold mining, or which had some connection with the ‘Gold' of Athens, or a similarly sacred nature. Let us see what the great geographer Pausanias has to say about this island:

The island Chrysi is situated a short distance from Limnos. They say it was in Chrysi that Philoctetes met disaster in the form of a sea-snake. The entire island was covered by the waves, sank and disappeared into the depths. Another island called Iera (‘Sacred'), which had not existed before, (emerged): so ephemeral are the things of man. We return now to the Homeric age to find other ancient accounts. Who was Philoctetes? When Jason passed through Chrysi (Psathoura was the final island on Jason's route from ancient Iolkos) he set up an altar dedicated to Athena, who to whom the island probably owes the name Chrysi.
Let us read Sophocles's tragedy ‘Philoctetes' and the dramatic story that took place in Psathoura. The story is as follows: the leaders of the Trojan expedition consult an oracle which tells them that if they wish to take Troy, they must find the Temple of Athena rising from the sea (by earthquake, presumably) and make a sacrifice there. The only person who knows of the hidden temple is Philoctetes. He shows the temple to the waiting Greek fleet, and is punished by the Goddess with a bite from a guardian snake. The Trojans take him with them and leave him in Limnos for the duration of the Trojan war. Philoctetes was tortured with terrible pains, but his martyrdom ended when a new oracle obliged the cunning Oddyseas to intervene. The oracle said that the wounded Philoctetes had the weapons of Hercules, which the Greeks needed to take Troy.The theft was undertaken by one Neoptolemos, who used trickery to get them off the unhappy Philoctetes. Odysseas intervened at the last minute and the restoration didn't take place. Finally a solution was found: Philoctetes was to travel with Odysseas, Neoptolemos and the weapons to Troy, to help in its final conquest.

The island is volcanic in origin and its ‘tropical' beach — perhaps the most beautiful in the Sporades — its dark colour and its flatness — a mere 10-14 metres above sea-level — are reminiscent of the Polynesian archipelago. In the sandy depths off the coast there are sunken buildings, which take one back to some ancient sunken city…

Some photos from the island of Psathoura 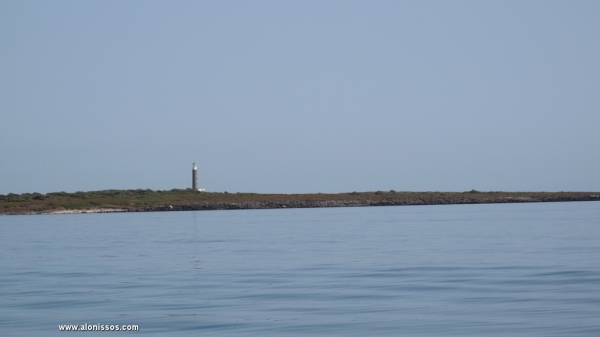