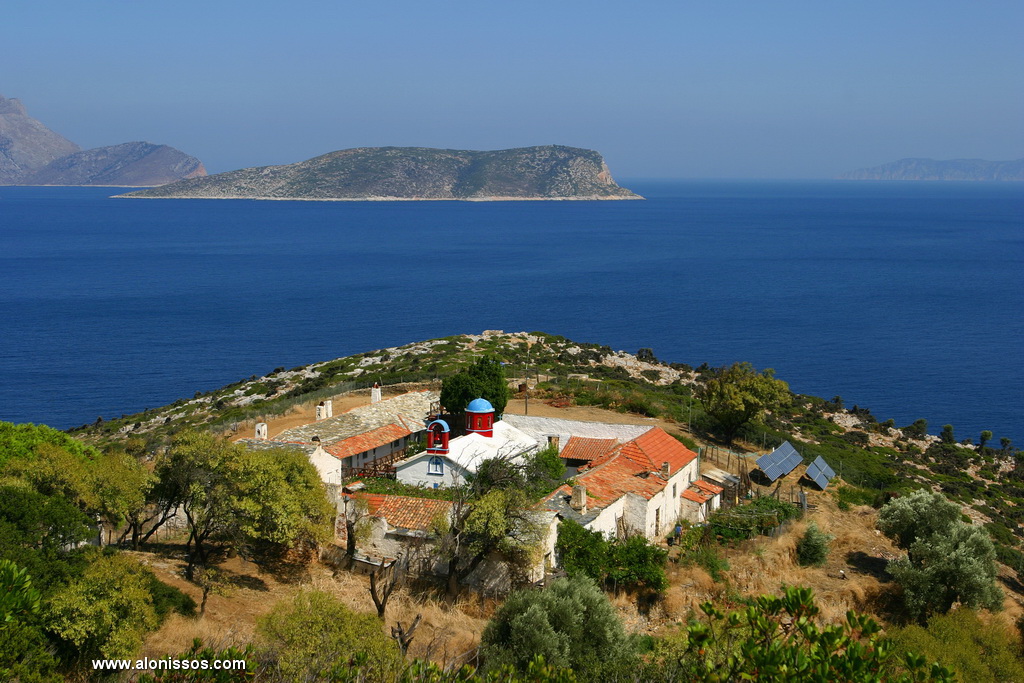 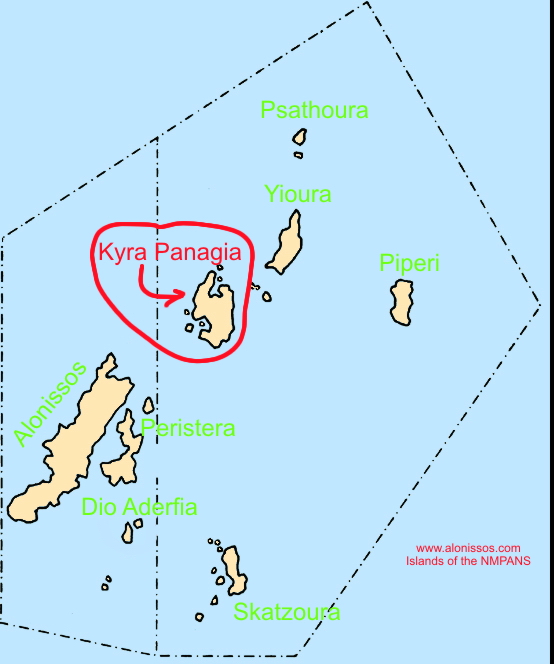 With an area of 25 square kilometres Kyra Panayia is the largest of the desert islands.

The hills are between 169 and 299 metres high. It was the ancient Alonnisos, and later named Pelagonisi. The island is now the property of the Grand Lavra monastery on Mount Athos, and takes its name from the monastery of the same name there. The story begins in 963 a.d., when Saint Athanasios bought the island from the Byzantine noblemen of Constantinople as a dependency of Mount Athos, which it supplied with food such meat, honey, oil, and wheat. It is well-known that women may not enter Mount Athos, but many will not be aware that neither are female animals allowed, so Athos's requirements of meat are met by its dependencies. This is how goat-farming started on Kyra Panayia, and the system whereby the island is rented from the Grand Lavra monastery by goat-farmers to graze their flocks continues to the present day.

The island's monastery, built in 1100 a.d., is situated on the South-eastern side. Up until 1984 there was still a monk there. The monastery overlooks the sea from its height, and resembles a small fortress, reminiscent of the times when pirates laid waste to the area. Its natural harbour is exposed to the elements and caïques can only approach in favourable conditions.

The monastery buildings, simple but impressive, were restored in 1992 with funds given by the Potamianos family, and is again ready to receive monks who might wish to go there. It is interesting to see the still-existing old oil-press and flour mill. From up here on clear days there is an excellent view of the island of Yioura opposite, with the rocky islets Pappous and Grammiza in front of it, and further off the little island of Piperi. In good weather one can see the flat bulk of Psathoura jutting out of the sea in the distance.

There are many olive trees on the island, which in former times provided the monastic community with oil and olives. Nowadays no-one looks after them and the harvest is meagre. Similarly, cultivation of the island's fertile plains has been abandoned. There are many springs on the island, so that in former times farm animals could be kept. The island's surface is covered chiefly with scrub-oak and other dry, low vegetation.

Kyra Panayia has two large natural bays: Ayios Petros in the West and Planitis in the East. When North winds blow caïques can shelter in the protected bay of Ayios Petros. Here too the Byzantine sailors moored their ships, and one of them sank in the depths of the bay; the wreck has still not been investigated by archaeologists.

In ancient times Kyra Panayia was the centre of these desert islands, which were not then as deserted as today. Remains of neolithic dwellings have been found on the island, so Kyra Panayia is reckoned among the earliest of the Aegean islands to have been settled. (About 6,000 B.C.) Ancient ruins have been found opposite the islet of Melissa in Ayios Petros bay. It is possible that an entire ancient city was established here, as witnessed by the ruined walls discovered on teh coast of the bay. Certainly the finds have a story to tell to archaeologists who will study them. The island was inhabited continually up until the classical era, but became well-known during the dispute between Philippos and the Athenians. From the 5th century B.C. it belonged to Athens. In 351 B.C. Sostratos, a brigand from Peparithos (the present-day Skopelos) took over the island and made it his stronghold. Then a little before 346 B.C. Philippos took it over and chased Sostratos out. The Athenians however, to whom the island belonged, complained, and Philippos agreed to hand it back to them. In spite of this the Athenians remained unsatisfied and Igisippos made his speech ‘Concerning Alonnisos', of which only fragments survive. This speech was mistakenly attributed to Demosthenes, whose own work of the same title is lost.

In the southern part of the bay the plain of Ayios Petros stretches down from the mountain, full of olive trees, and at its end there are remains of an old monastery.

The bay of Planitis in the East is one of the largest natural harbours in the Mediterranean. Its entrance is about 80 metres wide and then it divides into western and southern areas, each several hundred yards wide. Arriving in Planitis by caïque one wonders why, with such an ideal natural harbour, no settlement has developed. The fact that the island belongs to Mount Athos appears to be the reason there has been no settlement in recent history. This is fortunate for the natural environment, which has remained undamaged except for over-grazing, and for the present-day visitor who can enjoy the genuinely natural countryside of an Aegean island.

Some photos from the island of Kyra Panagia 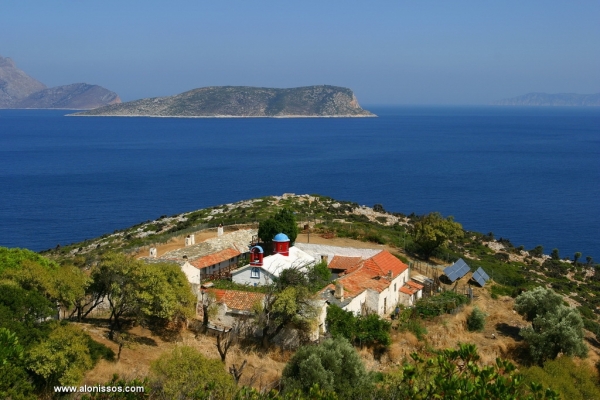 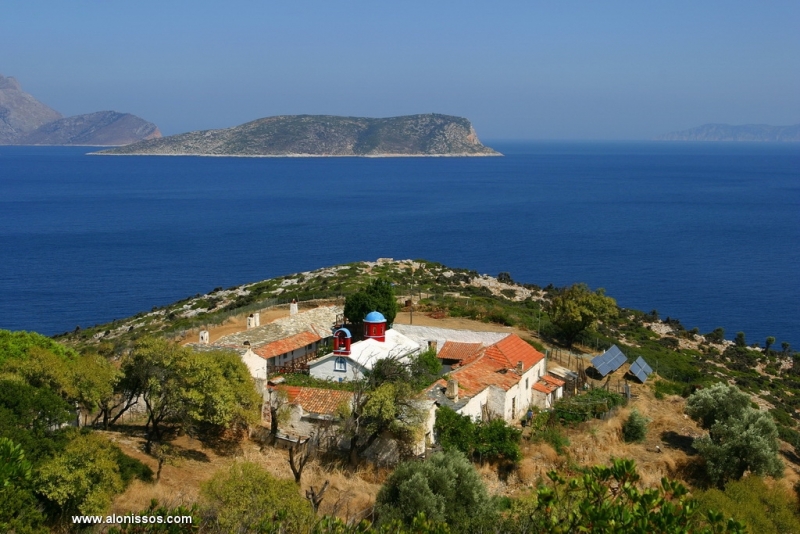