The svelte Eleonora (Falco eleonorae) is the most remarkable species of bird that come to the islands. The Falcons nest on the cliffs of the coast and the shrill cry is heard from afar. It is a rare sight until thirty hawks together as a group tend to hunt in flocks.
The rarest of bird of prey nesting in the cliffs even the Northern Sporades is the Bonelli's eagle (Hieraaetus fasciatus). In form and shape resembles a large kite, and if you are among the lucky, you can enjoy the spectacular sight of a Bonelli's eagle that chases rabbits.

Bonelli's eagles were found near the park especially in the islands Yioura and pepper. Still, the park can see buzzards (Buteo buteo) and kestrels (Falco tinnunculus).
Goshawk (Accipiter gentilis), Sparrowhawks (Accipiter nisus) and dendrogeraka (Falco subbuteo) go where and where the maquis to hunt small birds and can see some of them in one of your walks. Society of birds belonging to the Sporades and the short-toed eagle (Circaetus gallicus). He has a round head and owl-like, as denoted by its name, specializes in capturing snakes, who grabs the cutting of nails. The short-toed eagle is a migratory bird that winters in western and northeastern Africa. The rare peregrine falcon (Falco peregrinus) nesting on the steep shores of the islands. Owl those found in the Northern Sporades is the owl (Athene noctua) and scops owl (Otus scops), the characteristic of voice fills the spring twilight. 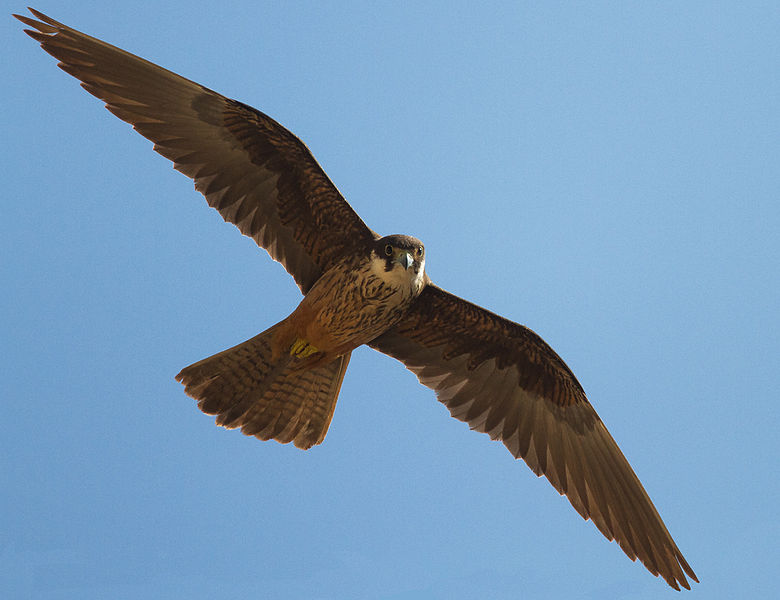 Appearance: slender than peregrine
Colour: Varies from pale to dark, with many intermediate steps ¬ like. Rarely will see two identical birds. In the pale phase resemble dendrogerako (Falco subbuteo), except that the backs closer to the brown-gray and belly with brown rust. In the dark phase of the color is brown to black and resembles the male mafrokirkinezo (Falco vespertinus), but the legs are yellow.
Length: 38 cm
Habitat: frequented rocks and the rocky coast is the place where klossaei egg.
Reproduction: In late summer, when migratory season begins. Then hunt mainly small birds passing with which feed their young.
Winter: Madagascar
Food: Small birds, insects, or who hunt near the coast either on the open sea. Birds in the maquis, in shrubland and farmland

Birds of rocks and steep coasts

Besides the Falcons, among the birds that live in rocks and craggy coastline is the Common Swift (Apus apus), the vounostachtara (Apus melba), the blue rock thrush (Monticola solitarius), as the vrachotsopanakos (Sitta neumayer), the martin (Ptyonoprogne rupestris), the dendrochelidono (Cirundo daurica) and stately raven (Corvus corax), with its characteristic deep cry.
Seabirds

Very interesting is the Sporades, the presence of the rare Audouin's Gull (Larus audouinii), which nests and breeds in only a few particular points throughout the Mediterranean. Creates colonies on rocky islands, which we call here as the Audouin's Gull is a protected species. While visiting the park with a boat, armed with patience and try to notice with your binoculars and the Aegean Seagull flying or resting on the rocks. Especially at the end of the breeding season, Audouin's Gull to see make their appearance in the small fishing ports.
Top Water

This time we have reached the sea very rough trip in our boat in the park. San nutshell shakes the boat over the waves and it is difficult to identify with binoculars different species of birds that fly out there, usually near the water surface. Distinguish Muxou (Puffinus puffinus) to fly in flocks and forth in a seemingly pointless flying. They are like seagulls at a mini-version, only the flying is much more nervous. Sailing sometimes and sometimes beating their wings without being removed far from the surface, like a commando formations, stroll from side to side following the movement of waves. Lowered again just touching the sea and quickly getting up again to go below. The gulf nest in caves in the cliffs of the coast and often you will hear screams coming from there, strong and shrill. Similar behavior in the nest has a shearwater (Colonectris diomedea), which are scarce and somewhat larger in size. And this is one of the birds that might come and sail the boat between the islands.
A rare winged inhabitant of the sea area of North Sporades is petrilos (Hydrobates pelagicus). More often you will see flying Syriza water - or even swim - cormorants (Phalacrocorax carbo) and shag (Phalacrocorax aristotelis). The shag, which is a mini version "of cormorants are more connected with the sea than the cormorant and lives on rocky shores on islands with steep cliffs and caves carved by the sea. Both types will often have the opportunity to observe in the National Marine Park.
Migratory birds

A large number of small birds, the Northern Sporades are an important link in the international network of stations resting migratory birds. In addition, some species of birds come here to winter. Among them are many dendrofylloskopoi (Phylloscopus collybita) and thamnopsaltes (Prunella modularis). But not only small birds that use the Sporades islands as a stopover. Large birds, such as lefkotsiknias (Egretta garzetta), the egret (Casmerodius albus), the kryptotsiknias (Ardeola ralloides), the purple (Ardea purpurea) and mikrotsiknias (Ixobrychus minutus), often seen here during the migratory period in spring and autumn. The "way" and visitors are birds of prey such as sfikiaris (Penis apivorus), the lesser spotted eagle (Aquila pomarina) and the imposing thalassaetos (Haliaeetus albicilla).